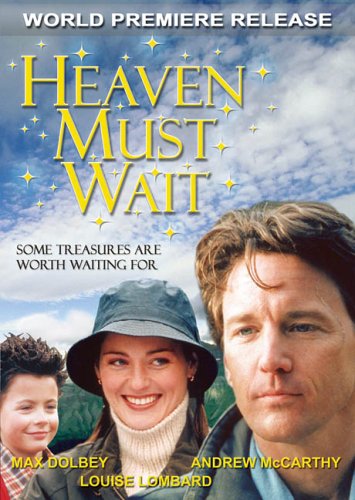 Starring Andrew McCarthy (Weekend at Bernie's, Lipstick Jungle, Spiderwick Chronicles) as Raymond, Louise Lombard (CSI) as Rachel, Max Dolbey (The Musketeer) as Diggity, Heaven Must Wait is a touching tale of love and redemption. Raymond is the family black sheep. He's lost his job, his apartment, and all his confidence until word comes that he has inherited an English countryside property. Raymond soon discovers his inheritance is no manor house, but a small, crumbling stone church that's the center of a scheme by the village scrooge, Malcolm Slee, in his frantic search for a valuable chest of gold hidden in the village by King Charles. Raymond initially accepts Slee's offer to purchase the church, but has second thoughts when he learns from the local Bed amp; Breakfast owner Rachel that a family with children lives on the property. As Raymond and Rachel begin to bond, Raymond is singled out by a mysterious young orphan named Diggity, who believes that if he helps Raymond find his way in life, he will earn his wings as an angel.

Andrew McCarthy made his professional début at 19 in Class. He has appeared in dozens of films, including The Spiderwick Chronicles, The Joy Luck Club, Mulholland Falls, and of course such iconic movies as Pretty in Pink, St. Elmo's Fire, and Less Then Zero, as well as cult favorites Weekend At Bernie's and Mannequin. On television, McCarthy co-starred for two seasons on Lipstick Jungle (where he also worked as a director). A few of his other TV credits include Royal Pains, Stephen King's Kingdom Hospital, and all the Law amp; Order's, as well as White Collar and Gossip Girl (both of which he worked as a director as well). In the theater, he has starred on Broadway in the Tony Award winning play, Side Man, and in The Boys of Winter. Other New York appearances include Neil Labute's, Fat Pig and John Patrick Shanley's, Psycopathia Sexualis. He has directed several works of Neil Labute, as well as plays by Warren Leight and Julia Cho. In a parallel career, Andrew is an award winning travel writer. He is an editor-at-large at National Geographic Traveler, and has written for The New York Times, The Atlantic, The Wall Street Journal, Slate, Travel+Leisure, Afar, Men s Journal, Bon Appetit, National Geographic Adventure, and others. The Society of American Travel Writers named him their 2010 Travel Journalist of the Year, and in 2011 he won their Grand Award. He also was awarded the 2011 Grand Award from the North American Travel Journalists Association, and has three times been cited for notable work in the "Best American Travel Writing" series. His memoir, THE LONGEST WAY HOME, will be published by Free Press in September 2012. He lives in New York.

Up to 30% off gifting for the home
- Carousel

Your home and garden needs met this holiday.
Shop Now
Shop Now
- Shop Now
Carousel showing slide 1 of 3 - Up to 30% off gifting for the home

Get the hottest holiday gifts

See all Get the hottest holiday gifts
Featured
Deals made easy all year long.
Free shipping. Best prices.
Get your thing
Get your thing

Today's Deals – All With Free Shipping